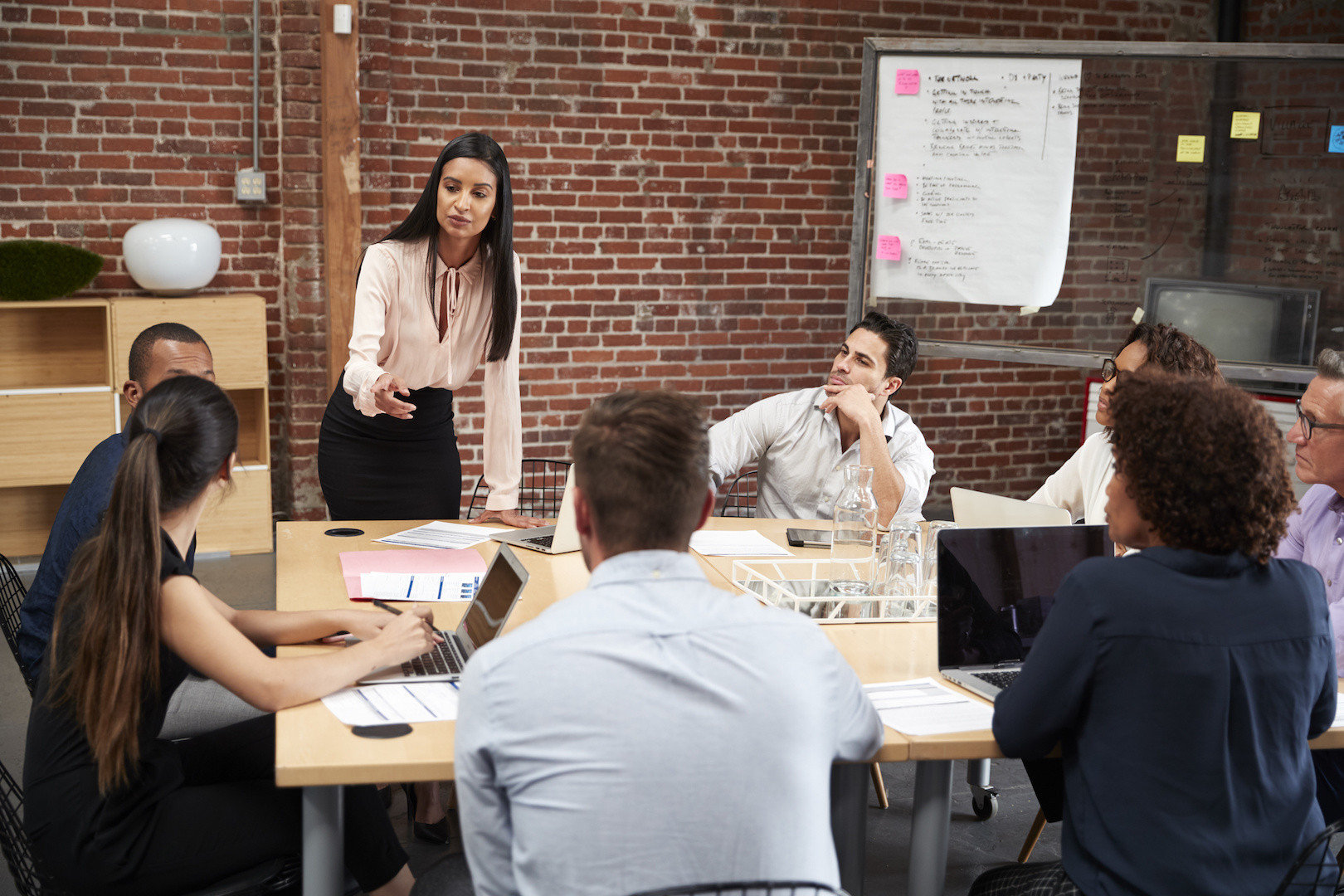 It is useful to think about leadership as comprising three dimensions: leading down, leading across, and leading up.

At a recent seminar, I asked participants to define their company’s biggest barriers to success.   The main impediment, they said, was their top leaders’ immunity to feedback. “They just won’t listen to new ideas”, “They are living in yesterday’s world”, “They think they have it all figured out and simply want us to execute.”

My initial reaction was to lay sole responsibility on the participants themselves. There is no “they” in leadership I argued. The question: “Why don’t they …” will produce no results except victimhood. Effective leaders take personal responsibility to make the right things happen. “You simply have to be better at leading up”, I insisted.

We spent the rest of the seminar wrestling with the challenges of leading up – what the military calls telling truth to power. As we deepened our exploration, the reality emerged that subordinates indeed have a key role to play but cannot achieve this entirely on their own. Their leaders need to be willing participants. Indeed, they need to champion the practice.

I’m sure many readers will recognize this failure of senior executives to learn from below as a common source of employee dissatisfaction and lack of organizational competitiveness. Let’s step back and examine the issue from a systems perspective.

Leading from the middle

To begin with, it’s useful to think about leadership as comprising three dimensions: leading down, leading across and leading up. Popular portrayals of leadership start with the assumption that leaders lead from the top and that mobilizing “followers” is the main challenge. This heroic view of leadership, based solely on this one-dimensional factor, is a flawed concept.

I suggest that a more accurate perspective is that we all lead from the middle. Regardless of status, we owe a duty to a cause or entity larger than ourselves. Leadership is not about power, it is about service, Peter Drucker emphasized. Apart from dictators, who exercise power through coercion, effective leaders are skilled at influencing in all three directions. Think of leaders such as Nelson Mandela or Mahatma Gandhi, who dedicated themselves to a noble purpose, and not only inspired followers but constantly built coalitions of cooperation across political boundaries. CEOs of course are responsible to their boards, but the successful ones help their boards think clearly about the big issues, ensure their employees are focused and engaged, and constantly promote collaboration and teamwork across functions.

Much has been written about leading down and leading across without formal authority, but the challenges of leading up have been largely ignored. This dimension is at least as important as the other two, but in many ways more problematical because it is fraught with psychological sensitivities, questions of loyalty, and perceived challenges to authority. In view of these complications, success requires the creation of deeply rooted cultural norms which promote the practice – a social contract, if you like.

Why is leading up so important?

The willingness of leaders to accept feedback is not a just a source of personal frustration. It goes to the essence of being a successful learning organization. During my 20 years as a CEO I recall the dangers of what I call the “curse of power”. This takes two forms. First, as we rise to higher positions in a hierarchy, we become increasingly more isolated from what is happening at ground level. Second, there is a natural tendency for subordinates to tell you what they think you want to hear. In the absence of effective antidotes, leaders can become blind to truth and this sets an example that infects the entire organization.

As I have written in my other articles, I believe the only sustainable competitive advantage in today’s volatile environment is the ability to create an organization capable of ongoing learning and renewal. To thrive, companies must be geared to promote the flow of ideas down, across and up through the organization and operate as one integrated brain.

Leaders must unfailingly set the example. Dr. Ash Tewari, pioneering surgeon and Systems Chair of Urology at Mount Sinai hospital, diligently practices this type of interactive learning with his team. Everyone rapidly gets to know and adopt the best practices everyone else has learned. Tewari himself is the keenest learner on the team. One of his commandments: learning demands “no subordination”.

Arguably the most important learning is that which occurs from the ground up. When that circuit is blocked, an organization faces a survival problem. According to a Gallup poll, companies that listen to their employees are 21% more profitable than the competition.

Consider the current travails in the Boeing corporation arising from the design flaws of the 737 Max that caused two fatal crashes. During the ensuing investigations, it became clear that a number of engineers close to the design of the aircraft saw the problems and voiced deep concern about the potential consequences.  But the stark reality of impending disaster never traveled effectively to the top leaders – who were consumed by cost and timing issues – until too late in the process. As a result, Boeing has taken a massive hit to its profitability and reputation.

Or think about the collapse of General Motors. In the 1980s GM had captured more than 50% of the North American auto market and seemed unassailable. Complacency set in and product quality slipped. Toyota and Honda seized the opportunity with superbly reliable cars at reasonable prices. GM responded with cost cutting measures as their volume went into a steep decline. Salespeople dealing with customers saw clearly that customer defections were based on GM’s quality deficit. But top management remained deaf to this brutal reality and stuck doggedly to their cost cutting strategy. Eventually GM’s market share dropped to under 20%, the company went broke and had to be rescued by the US government.

An analogy is useful here. In military operations, the quality of intelligence strongly influences the chances of victory. The most reliable intelligence is that which is gathered closest to the enemy and realities of the battlefield. And then everything depends on this information traveling accurately and speedily to the commanding officers, thus placing them in a position to make timely competitive choices.

In the same way, the most accurate and current information about a company’s market performance lies with those closest to the interface with customers and competitors. If those insights don’t find their way swiftly and without distortion to the top decision-makers, organizations’ intelligence systems will become impaired and they will risk losing their competitive edge.

I am an unabashed Starbucks fan. It’s hard for me to start a class without my caffeine “fix” and their coffee is always fresh and rich in taste. But beyond that, it is a downright pleasant experience getting my coffee at my favorite spot. Starbucks is founded on the notion of the customer “experience.” Their winning proposition is, “We are not in the coffee business serving people, we are in the people business serving coffee.”

In 2011 an imaginative barista decided to enhance that personal experience by writing the first names of customers on cups, instead of just calling out the name of the drink that had been ordered. The idea raced to headquarters and today this simple practice happens four million times a day at 30,000 locations worldwide.

Effective upward feedback processes are unlikely to occur without a negotiated commitment to a social contract between subordinates and their bosses.

At the start of each new hierarchical relationship the parties need to sit down and have a candid discussion about how they will work together. Subordinates should explicitly seek and secure permission to provide upward feedback, so that this doesn’t occur by surprise or in inappropriate ways. In the best of worlds, bosses should themselves initiate this discussion. In existing relationships, it is also necessary for this “reset” to take place. The manner in which this feedback process will occur needs to be settled and agreed.

These feedback sessions should never be framed as a challenge to authority or expressions of disloyalty. And always avoid promoting any suggestion in pursuit of your personal agenda. This motive invariably reveals itself and destroys the trust necessary for mutual learning. The only agenda should be the dedication to learning and discovery of truth. This process should be reinforced and socialized through organization-wide cultural norms.

I think of the great example set by David Ogilvy, the founder of Ogilvy and Mather, the global advertising company. Every year he convened a conference bringing together executives from every part of the world. In his keynote speech, he continuously stressed the need for sharing ideas across boundaries and upwards so that the clients in every country could expect to receive the best ideas from O&M globally, not just locally. Every year he exhorted his organization to practice what he called “divine discontent” – the dedication to identify what was not working well, but always with a recommendation on how to do it better. I can’t think of better advice on how to do upward feedback. I know from experience how dispiriting it feels to hear complaints from subordinates without suggestions on how to solve the problem.

Let’s deal with a rather delicate aspect of leading up: when the advice we want to offer is not about the operations of the firm, but the personal style of our boss. This is tricky terrain.

Once, during my days as a CEO, a subordinate brought me some bad news, but somewhat late in the evolution of the problem. “Why tell me so late?” I railed. I got a straight answer. “Willie, to be honest, we sometimes find you to be rather intimidating.” Wow, that was a shock to the system, but a valuable one. I had no idea this was a problem.

At the next executive committee meeting I asked for more detailed feedback. It was about the aggressive way I posed questions, I was told.  I didn’t feel aggressive, I was simply looking for good answers, I thought. But it was perceived as intimidating by others and that’s what mattered. And it mattered a lot, because it discouraged honest feedback. Not only did I take that guidance to heart, we agreed at that meeting on a process to be truth tellers to help each other be better leaders. It was a real turning point.

Leading up is a two-way street

Leading up effectively is not easy to pull off. But I think we owe a duty to help each other learn and grow regardless of rank. We all have our blind spots. When I look back on my corporate career, the subordinates I valued most were those who helped me grow as a leader.

The burden of leading our leaders is a shared one. Bosses must set the example by issuing the invitation for honest feedback from below and be willing to learn from it. Subordinates, in turn, should take on the responsibility to elicit that invitation. For them, the golden rules are “divine discontent” and the courage and compassion to tell truth to power.